What is Pokemon Go!? And how can my business get in on the craze? 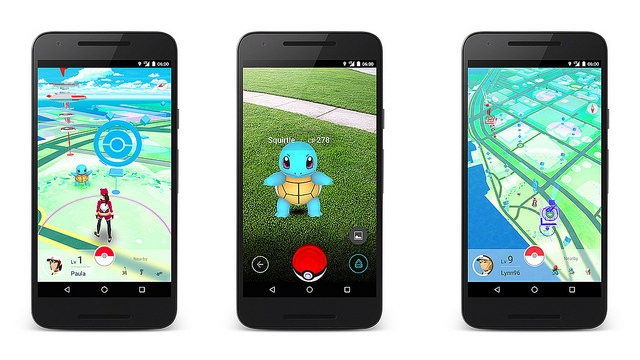 17 Jul What is Pokemon Go!? And how can my business get in on the craze?

As you may have heard, the number of people who have downloaded the latest sensation Pokemon Go! has now passed Tinder, the “hookup” app, and is closing in on Twitter. All in a span of about a week. That’s insane! If you haven’t accidentally walked into someone hunting for Pokemon on their phone at the local supermarket or noticed a lot more kids and 20-somethings aimlessly wandering around malls and neighborhoods,  you’ve at least seen something about Pokemon Go! on Facebook by now. So you know it’s big. To understand how you can leverage this popular game for your brick and mortar business, first you must understand what the game is.

For the over-30 parents out there you may know Pokemon as a cartoon your kids watch occasionally now in 2016, so what’s the fuss about? Why is a kids game so popular? What does that have to do with my business? To understand that, you have to remember that in the 90s, Pokemon was king. Pokemon was popular before cell phones took over, before the internet was even big and when millennials were in their now-nostalgic years. I’m 25. I was born in 1990. I will tell you right now that when I was 9 years old, I was obsessed with Pokemon, and so was every kid around me. Truth be told, nobody who liked it as a kid ever really stopped liking Pokemon!

Beyond the simple nostalgia evoking power of Pokemon Go!, there is also another added element that makes the game so addicting and attractive to all age groups: augmented reality. While virtual reality is still at the doorstep waiting to take over technology and gaming, Pokemon Go! utilizes augmented reality by using your cell phone camera to show you Pokemon out and about in the real world. In your house, at the park, in a Walmart, you name it. The idea of Pokemon Go! is to get people out and about and looking for these fictional creatures out in the real world to capture and collect.

So you understand what Pokemon Go! is, but how I do you leverage it for your business? Pretty simple, encourage people to come hunt for Pokemon at your place of business! There are several ways to do this.

We’ve already seen Walmart do this with Facebook ads. The ads encourage people to come to their store to hunt for Pokemon and offer deals on matching Pokemon plush dolls. You can do the same by running social media deals and encourage people to share photos of Pokemon in your business location to increase exposure.

2. Use the game’s lure feature to lure Pokemon to your business

In the game, you can purchase “lures” for a couple of dollars (real world dollars). You can place the lures that last for 30 minutes and draw Pokemon to your business location, advertise on social media with ads and events to draw foot traffic to your business.

Organize a fun event that involves the community by hosting a Pokehunt that starts at your business!